I discovered Raspberry Pi five years ago when my company asked me to create an IoT-powered device for demonstration purposes. To do so, I plugged in a few sensors to measure the humidity, temperature, and pressure in a room. The data were sent to an Azure Cloud server and visualized with Kibana. I was blown away by how easy it was to measure the world with this tiny computer and a few cheap sensors 🤯 I realized other cool stuff were to be done with it. Then came my next project.

My obsession at the time was to find a way to recycle my food scraps ecologically in my tiny apartment. My answer: build a connected worm compost bin 🤦‍♂️ Next thing you know, I bought a 3D printer, designed the whole thing, and printed it all out. 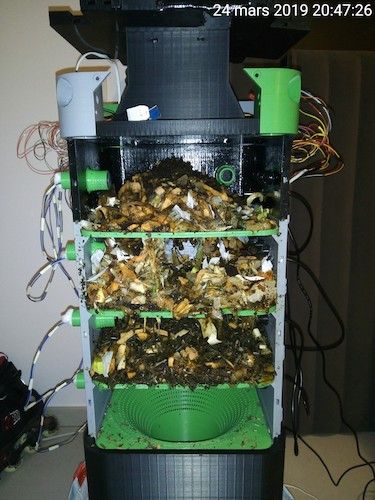 I used five Pi Zero, running 24/7, each mounted with temperature, humidity, and pressure sensors to monitor the bin. That is when I realized I would love to monitor the computers from my phone. Instead, I reluctantly logged in to each of my devices from my terminal and checked them that way.

My original idea for RaspiBuddy was to stick to monitoring multiple Raspberry Pi. But I eventually remembered configuring the interfaces (I2C, OneWire, etc.) before using the sensors could get tiresome. How cool would it be to do so from an app as well? It led me to add a "configure" section in the app. Finally, since the app was already doing many things, I also thought it could be cool to have a curated list of quality packages to install from the phone. I finally included an "install apps" section to do so.

Seeing monitoring, configuring, and installing apps on multiple Raspberry Pi from RaspiBuddy worked well, I naturally expanded my thoughts to other use-cases. Measuring the humidity/temperature in your bedroom, monitoring your plants' environment, creating a weather station, etc. The dream being to allow non-tech people to leverage the power of Raspberry Pi. RaspiSuite was born.